The construction of Discovery Bay was started in 1968 when large excavation equipment was moved on site to excavate Lido Bay, the development’s first bay.  The concept for the Discovery Bay Development and the first steps of the project began in 1964.  The original plan was to use land bordered on the north by Indian Slough, on the east by Old River and on the south by Italian Slough.  The original name of the development was Riverlake.  It would be a recreational community of bays dug from the Delta farmland, then filled with water by breaking the levee of Italian Slough.  It took the original developers years of meetings with county, state, and federal agencies before actual construction could begin.

Long before Discovery Bay was ever thought of, the tract of land covered in upscale homes today was noted for the large staple crops it produced.  The area between Byron and Old River was known as Byron Tract.  About 3,465 acres were owned by Frank A. West and Eugene L. Wilhoit of Stockton, and 3,000 acres belonged to Veronica Baird.  In the early 1900’s, the property was protected by huge levees, with a modern irrigation and drainage system on most of the land.  This section was planted with potatoes, corn, onions, beans, sugar beets and barley.   By 1920 West-Wilhoit had established a large hog farm on their holdings.  Their hogs were fed corn and barley that was grown on the property.

The southern portion of Byron Tract was known as Baird Estate.  Veronica Baird, a resident of New York, was the mother of Mrs. William Sproule, wife of the president of the Southern Pacific Railroad Company, and William Baldwin’s great grandmother.  This extensive estate was leased to the McCormack Brothers, contracting farmers, of Rio Vista.  It was planted primarily in barley in the 1920’s and 30’s.

In 1966, Weldwood Structures Division of U.S. Plywood and Bixland Inc., under the direction of Jorgen Lunding, the projects manager, entered into a joint venture arrangement to sell recreational lots.  Lunding is credited with naming the project “DISCOVERY BAY”.  By 1968 U.S.Plywood merged with Champion Paper Products, and by the end of that same year, decided to sell the projects to William Baldwin, an adjacent property owner.

Following the paperwork for this project is difficult at best.  Baldwin entered into a joint venture arrangement with the Title Insurance and Trust in Southern California.  They could not reach an agreement, so in 1969 their contract was cancelled.

Baldwin then went into partnership with Burt J. Davi, a civic leader from Pittsburg.  They formed Veronica Development Corporation (named for Baldwin’s great-grandmother Veronica Baird).  Discovery Bay lots opened for sale in October 1970, complete with a colorful tent as a sales office.  Salesmen in Jeeps took potential buyers to sites where the bays were to be built.  Andy Devine commercials and the Old Savannah paddle boat were used to promote the project.  Landlocked lots sold for about $9,000 and deep water lots ran about $15,000.

In 1973, the project was sold by Baldwin and Davi to a southern investment group named Boykin Investments.  Boykin held the property until 1975 when it went into default on its purchase agreement.  There were about 100 homes in Discovery Bay at this time.  Baldwin and Davi got the development back and formed the Dominion Properties Company.  Although Bank of America, Wells Fargo and Union Bank had originally been the lenders in the early 1970’s, Wells Fargo became the sole lender.

In 1977, the property was sold to Ken Hoffman of the Hoffman Company.  With the Hoffman Company in charge, the pace quickened rapidly.  Prospective home buyers camped overnight to be the early birds getting first choice of newly constructed homes on Willow Lake.  In 1978, Hoffman built a small condominium project on Windard Bay, the final deep water bay.

By 1988 two thousand acres of land had been developed with eighteen deep-water bays, Discovery Bay Marina, Willow Lake, a swim and racket club, a shopping center and a championship 18-hole golf course with a private 21,000 square foot clubhouse.

It’s hard to imagine the fields of barley or potatoes that once grew on Byron Tract.  Today we find a beautiful upscale community on the Delta, a community designed for people who want to live on the water. 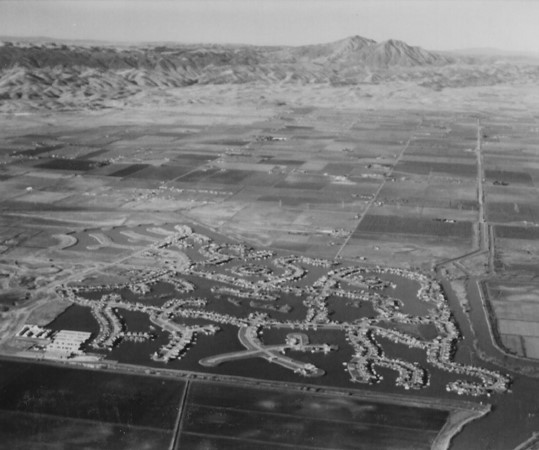